THE MUFFULETTA AND THE CENTRAL GROCERY IN NEW ORLEANS

A while back I posted a recipe for olive salad that approximates the one that is used at the Central Grocery in New Orleans. Then I started reading Yelp reviews (which I try to avoid at all costs) and recipes on the Internet. All of that inspired me to write about what is said to be the “Original Muffuletta” and the Central Grocery.

First, there are Yelp complaints that the Central Grocery is dirty. C’m’on folks, the store is on Decatur Street in the Vieux Carre (the French Quarter). It is as old and as down at the heels as all of the other buildings in the neighborhood. At least one history says that the store was founded in 1906. It has probably operated non-stop ever since, except during severe hurricanes. Besides, a visit gives you the opportunity to wander the aisles and see some amazing food choices, like Bombay duck – not a duck at all, but rather a long dried fish with fearsome eyes and teeth – sticking out of a barrel,  and Italian delicacies hard to find elsewhere.

Then, some yelpers complain about rudeness of the men who make the sandwiches. I guess those reviewers have never been to Katz’s or Russ and Daughters on East Houston in Lower Manhattan. It is true that you need to be ready to order when you get to the front of the line, but the men are as friendly as I would be if I made sandwiches all day long.

Some recipes on the Internet call for lettuce or tomato. That doesn’t work, because then the sandwich becomes a sub or a hero. Some say that there are better versions elsewhere. I don’t know about that, but remember that the original is the original. The only place I know of that has a comparable sandwich is Fertitta’s in a seedy part of Shreveport, LA. Fertitta’s calls its sandwich “the Muffy”, and they make claims to being the original.

Whichever, the tale about the Central Grocery is that around 1906, Italian workers started coming to the grocery with lunches of cheese and meat. The owner of the Central grocery suggested putting the lunches in loaves of muffuletta, a Sicilian bread, and the muffulletta sandwich was born. Probably apocryphal, but it makes a good story.

These days the sandwich is sold as a whole or a half, and the whole is cut into fourths before being wrapped in butcher paper.  That’s really enough for four people, but many customers eat the whole thing. The paper gets olive oil stains all over, and that’s when you know the sandwich is ready to eat. Boxes and barrels are used as seats and  scattered around the crowded store, but you probably want to take a brief walk to Jackson Square and enjoy your lunch al fresco on a sunny day.

Bread. To me, the bread is an essential part of the successful muffuletta. The loaves at the Central Grocery are delicious, and in my experience only available in Louisiana, especially New Orleans. Schlotzky’s makes a reasonable substitute. Recently I discovered that the 9 inch focacchia loaf from Panera Bread makes another suitable choice.

Meat. You can choose whatever you like. Mortadella – a good mortadella and not plain “baloney” – is almost a requirement as is salami (I used Genoa). Ham is also important. A good Italian coppacola is my favorite, but any thinly sliced delicatessen-style ham can be used. 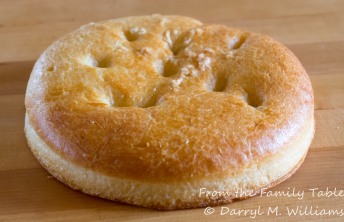 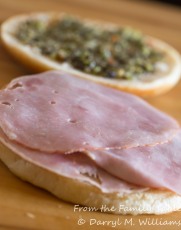 A layer of delicatessen-style ham 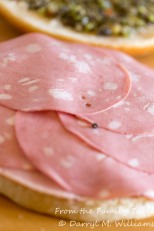 A layer of mortadella 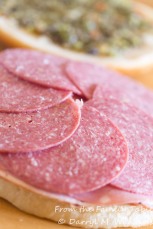 A layer of Genoa salami

Add a layer of Provolone 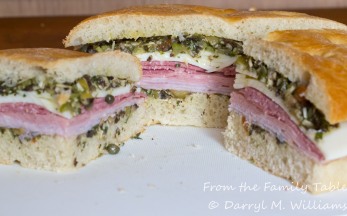 A muffuletta sandwich ready to eat