EATING MY WAY THROUGH SAN FRANCISCO – b. PATISSERIE

It is hard to say enough good things about the b. Patisserie. This French-style bakery has been open only a short time , but it has already collected a lot of awards and a big following. It is located in Pacific Heights/Laurel Heights at 2821 California Street. The chef/owner, Belinda Leong, a friend of Sarah and Evan, is an experienced pastry chef with many awards. She is formerly the pastry chef at the Michelin-starred Manresa in Los Gatos, CA and has also spent time in the fabled Parisian patisserie, Pierre Hermé.

The main attraction of b.’s is, of course, sweet pastry in the French style, but there is also a wide selection of granolas, mousses, quiches, and tartines so you can enjoy a nice lunch or snack with dessert. There ae pln†y of tables inside as well as some comfortable chairs outside. If you prefer, you can have it all packed in a box to take home, but then you have to forego the very interesting people watching.

There is a wide selection of croissants from plain (Is there such a thing as a “plain” croissant?) to a completely decadent chocolate, banana-almond version that is filled with a velvety banana cream.

The kouign amann is a wonder. Made of a light dough (I think it is puff pastry) and shaped like an opening flower bud, the outside is a caramelized brown, crisp and glistening with sugar crystals, reminiscent of a palmier. Break open the petals and the inside is filled with a nectar from the transformed sugar inside. You will need extra napkins even if you eat it with a fork.

The passion fruit-flavored bostock is redolent of almonds and the wonderful scent of passion fruit. The creamy little cake is so elegant and so flavorful.

When we visited, it was lunch time, so I ordered a muffuletta tartine. If you have been to New Orleans, you probably have had a muffuletta from the Central Grocery in the French Quarter where it is said the sandwich was invented more than a hundred years ago. The original is served on a giant Italian bread roll with provolone, salami and cappicola. The thing that really makes it a muffuletta and different from other subs, heroes, and po’boys, though, is the unique “olive salad” rich with garlic, olive oil, chopped olives, and pickled vegetables.

Belinda’s muffuletta nails the flavors of the original, including the olive salad. But it is so much more: served on a thin slice of flavorful toasted French bread slathered with olive salad, covered with Black Forest ham, Genovese salami, and mortadella topped with provolone melted under the salamander. Only one word: delicious.

To help you make your own muffuletta, either like the original or as a tartine, I am providing you with one of our family secrets, a recipe for olive salad that we collected when we lived in Louisiana and have subsequently included in our family cookbook.

Fresh spring tulips on the table

Waiting in line at the pastry case 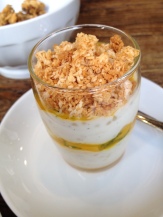 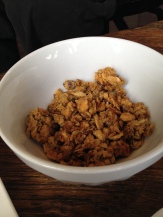 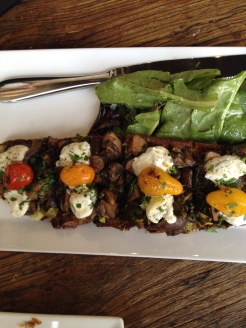 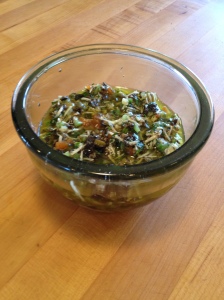 6 responses to “EATING MY WAY THROUGH SAN FRANCISCO – b. PATISSERIE”