In my last post, I mentioned that I had been charged with salad for a dinner party. The main course was going to be barbecued ribs. Potato salad seemed out as too heavy. Besides I wasn’t sure if someone else would bring that. It’s also no longer the season for pasta salad, so I thought about one of my old favorites, three-bean salad. Someone reminded me that it seemed sort of old-fashioned, but it still sounded good to me. Then I thought about quinoa. Light, refreshing, and a little bit unusual. I usually make it with gandules or pigeon peas, but they were nowhere to be found in the local markets, so I reconsidered the three-bean salad and decided to combine my two top options.

If you have never cooked with quinoa, you will find it to be an amazing ingredient. It is a seed that comes from plants originally grown in South America but now cultivated throughout the world. It is used like a grain, but it is not a grain so it does not have the gluten that so many people worry about these days. It is rich in protein and reportedly has all of the essential amino acids, so it certainly sounds healthy. You do need to be aware that it is also loaded with saponins. These are naturally occurring detergents that make the quinoa taste soapy if you don’t wash them off. Many pre-packaged quinoa products have had the saponin removed, but the detergent may still be present in bulk quinoa. In either case, it is probably a good idea to rinse the quinoa before you cook it. You can do this easily by placing the amount you plan to use in a fine-mesh strainer and rinse it under a spray of cold water until all of the foam subsides – maybe a minute or so. Drain it well and get ready to cook it.  Besides being tasty, cooked quinoa is also beautiful. The seeds burst open and reveal a delicate little curl. My wife, the botanist, is not sure but thinks the curl is probably the endosperm.

Except for cooking the quinoa and preparing pickled mushrooms (as I described in my last post) this is pretty much a chop and dump recipe, so it is very easy to prepare. 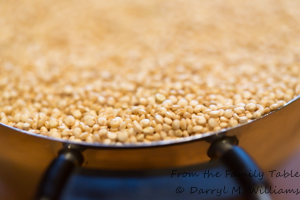