The ship sailed into the harbor at Santorini just as the dawn broke over the Aegean Sea. We were surrounded by mountaintops glistening a blazing white. Snow, I thought. In the Mediterranean? Impossible. And then I realized that the villages of Santorini were perched on the peaks surrounding us, washed an incredible white, and glued to the impossibly steep slopes all the way to the harbor below. No wonder so many tour guides call Santorini the best island escape in the world.

The islands have been populated for thousands of years, but they have also been the scene of unthinkable human disasters. Even from a ship, it is clear that the villages have been built upon the remaining walls of an ancient volcano, and that the harbor nestled in the ring of islands is the caldera of that volcano.

Minoan culture once thrived on the islands, not that of the capital in Crete, but clearly more than just an outpost. Ancient ruins have been excavated showing vivid wall paintings, impressive buildings, and a thriving population center. All of that came to an abrupt end in about 1600 BCE when the volcano exploded with one of the largest flows of smoke, lava, and ash during historical times. Crops failed in China because of the explosion, and the civilization on Santorini was annihilated. The islands remained uninhabited for hundreds of years. Some believe that the disaster is the source of the legend of Atlantis.

There have been other eruptions over the centuries, and seismic and volcanic activities have been recorded in recent years. Still the inhabitants seem oblivious to all of this, and the visitor is soon caught up in the apparent tranquility of the scene.

The sands of the popular beaches may be red or black or white depending upon the color of the volcanic layer from which they come. The environment is that of a desert with desert plants and no natural sources of water except the rains. Some of the buildings are painted in pastel shades, but the great majority are whitewashed with bold blue trim. Churches are everywhere, and their vivid blue roofs meet the clear blue of the cloudless skies. Narrow streets weave along the crests of the hills. Everyone seems to relax in a casual stroll.

Our  visit ended with a ride down the cable car with a panoramic view of the harbor down below. It is easy to see why many Greeks as well as celebrities have chosen Santorini as a quiet getaway.

The impossibly precarious villages of Santorini 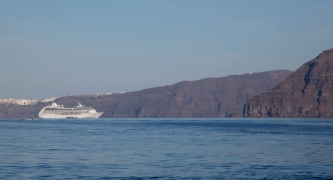 Passageway with a beautiful vista

Santorini shapes and colors set against the blue of the caldera 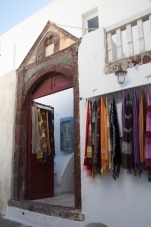 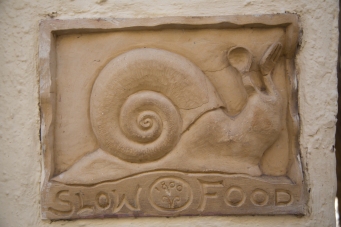 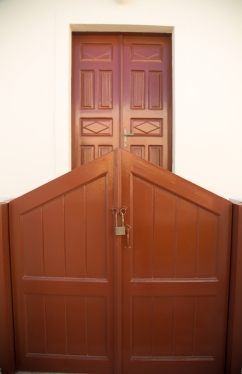 A beautiful gate and matching door 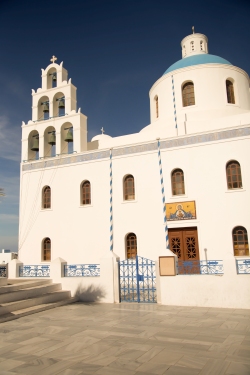 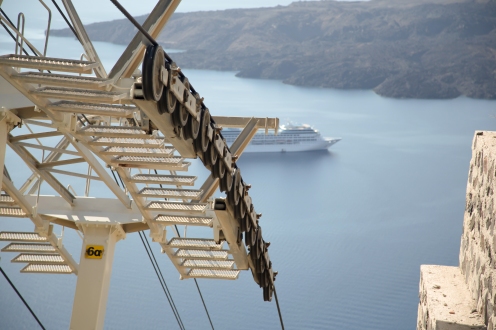 Return to the ship by way of the cable car

More than forty years ago when we lived in Salt Lake City, Susan was well-known amongst our friends for one of her hors d’oeuvres which she served with drinks. The recipe came from the local Junior League’s Heritage Cookbook and was called “crab triangles”. The dish was equally popular when we moved to Shreveport. It called for flaked crab meat, cream cheese, phyllo dough, and butter. At the time, neither of us knew that the triangles were a riff on the Greek treats, tyropitas (phyllo triangles filled with cheese) or spanakopita (phyllo triangles filled with spinach and cheese)

The following recipe is not necessarily authentic (every Greek family has its own recipe so, what, after all, is really “authentic”?) But it’s pretty close to the real thing, and it is good enough that you probably will not have any leftovers. It uses frozen phyllo dough which usually comes in a 1 pound box containing two separate rolls of 20 leaves of dough in each roll. Be sure to read the label.

The three steps in rolling up the phyllo triangles

Triangles with the last coating of butter (!) on the baking sheet

10 responses to “SANTORINI AND SPANAKOPITA”