It is the custom in the US South to eat black-eyed peas and cabbage on New Year’s Day, one for good luck and one for wealth. Some believe that not to eat these dishes will result in the opposite effect, bad luck and poverty.

Our family lived in Louisiana to get into the custom, even though we didn’t really believe the superstition. The habit has persisted even though we have lived outside the South for many years. There must be lots of other former Southern citizens in our Southwest community, because canned and frozen black-eyed peas are always sold out days before New Year’s Eve.

There are many versions of cooked black-eyed peas which qualify as good luck charms the New Year: Hoppin’ John, Texas caviar, black-eyed pea vinaigrette, and plain ol’ Southern black-eyes. The following recipe borrows from all of those classics. Likewise, the cabbage dish is an update of plain old boiled cabbage.

It may be too late for you to get your protection for 2013, but hold onto the recipes for next year. In the meantime, HAPPY NEW YEAR! 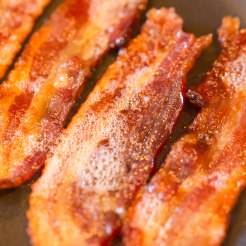 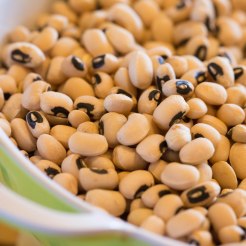 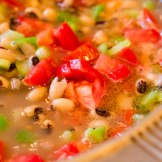 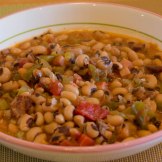 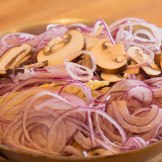 Napa cabbage, red onions and mushrooms ready for the braise 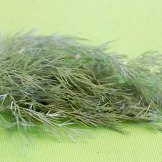 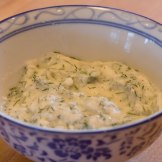 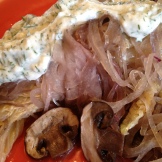 If you wish, serve the black-eyed peas with cooked rice, along with cornbread on the side for dipping.