A SHORT HISTORY OF CORN

A couple of years ago, my two daughters and I started a book about corn (maize) to include recipes for a wide range of corn-based breads from around the world. The project bogged down when I started writing a blog, but we plan to revive our effort. Here is a short excerpt from the introduction. It may be more than you want to know about corn (maize), but I hope that you will find it interesting.

Nearly every American  school child knows that when the Europeans first came to the New World, they found a virtual cornucopia of foods which they had never seen or tasted before.  The explorers took back to their homeland many foods that soon became imbedded in cuisines in Europe, Asia, and Africa. Of these edibles, eight of the current 26 top crops by tonnage have become essential to many diets, and include maize (called corn in the United States and other English-speaking countries), potatoes, tomatoes, chiles, peanuts, manioc, chocolate and vanilla, and sweet potatoes. Other important New World contributions to the global diet included beans, squash, turkeys, pineapple, and avocado, along with numerous herbs, fruits, and nuts.  Of these foods, undoubtedly corn has become the most important for providing nutrition and calories throughout the world and in all socio-economic situations.  To support this contention, consider that corn (or maize) is grown on all of the inhabited continents, China grows more corn than any other country, and corn-based dishes are served in China, India, Africa, England, France, Italy, and all of the countries of Central and South America. Refined corn is used for cooking oil, sugar substitute, and food additives. Corn serves as a major food source for animals raised a sources of meat. It is an integral and essential part of nearly every human’s diet.

Maize (corn) was domesticated nearly 9,000 years ago by people living in the region of what is now the Mexican states of Michoacán, Guerrero, and Mexico. Like all modern food grains, it arose from a wild grass – in this case a large grass, Balsas teosinte, that even to this day grows in the Central Balsas River Valley. 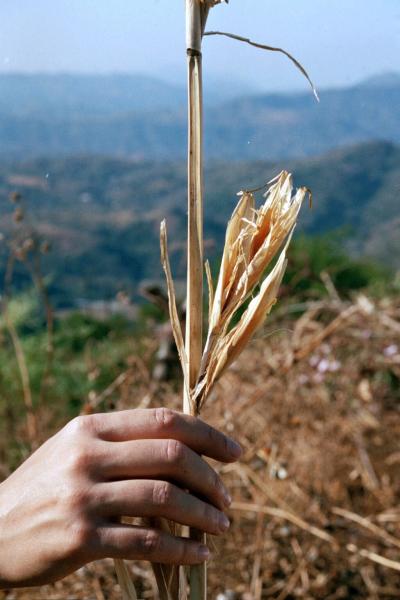 Although no one knows exactly how or how long the process of domestication developed, clever modern breeding studies have produced hybrids of teosinte and maize that give us an idea of what some of the grains may have looked like along the way. 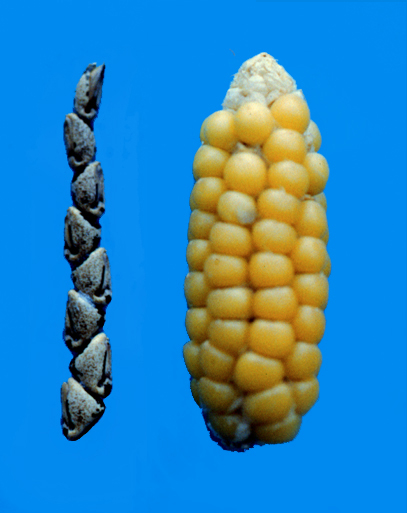 It is clear that both the Aztecs and Mayas consumed domesticated maize, and archeological records document that domestic corn spread to Panama by 7,600 years ago and to Uruguay by 4,600 years ago. Later, domesticated corn spread throughout both North and South America so that it was an important part of the diet of the native peoples throughout the New World when the Europeans arrived. The European explorers took back seed grain, and the cultivation of corn spread quickly throughout Europe and then into Africa and Asia. This rapid acceptance occurred  largely because of ease of cultivation, wide range of favorable growing conditions, and usefulness as a basic foodstuff. Now virtually every culture in the world depends upon corn and has unique and traditional dishes based upon the grain.

3 responses to “A SHORT HISTORY OF CORN”