This last week, our daughter Sarah and her 10 month old son, Van, visited us from San Francisco. Since she is a chef, we spent a lot of time eating at some of our favorite restaurants as well as doing a lot of home cooking. Without doubt, the food highlight of the week was the dinner which Sarah cooked for us. The menu was designed to feature the foods that Susan and I especially like, but they were all done with a restaurant-quality twist.

The feature of the main course was halibut. Sarah brined thick slices of the beautiful fish for just a few minutes to remove the extra moisture that you often see when a fish like halibut is cooked. Then she sautéed serving-sized fillets in butter to just underdone, finishing off by topping each piece with herb panade (more butter along with bread crumbs, garlic, salt, and herbs) and broiling for just a couple of minutes until the fish was perfectly cooked and the panade was golden brown. 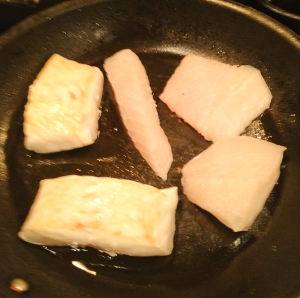 The vegetable was carrot stew: baby carrots simmered in fresh carrot juice that was then reduced to make a thick sauce. The sugar of the carrots and the carrot juice made the dish sweet – but not too sweet – without the addition of any sugar.

As an added touch, “melted” leeks were chopped finely and cooked into a smooth, savory dish which could be shaped into quenelles to top the vegetables. Then everything came together into a beautiful presentation.

For Sarah, probably the best part of the week was the news she had been anxiously awaiting for months. She and her chef husband, Evan, had been working on securing space for their own restaurant in San Francisco. The contract finally was settled, so she spent time at the kitchen table reviewing and signing the documents before faxing them back to Evan. We had a celebratory dinner at Terra (I’ll say more about that in another post).

Later in the week, Sarah returned to San Francisco to help post the sign in the window of the new place.

If you want to read more about their new restaurant, check it out at the following link:

One response to “SARAH COOKS IN SANTA FE”